By: Things about Cats
In: cat breeds
Tagged: Sacred of Burma, the Birman cat
With: 0 Comments

The Birman or “Sacred of Burma”: a cat whose name is still confusing. In fact, in English, it is called “Burma”, a cat breed not to be confused with the Burmese! The Birman is the result of a French breeding program dating back to the 1920s. Learn more about this cat breed, halfway between the Persian and the Siamese!

Origins of the Sacred Birman Cat

Such a beautiful cat deserves a nice legend about its origins! The story says that he got his beauty from the intervention of a blue-eyed goddess, who would have rewarded the cat of a priest living in a temple, for his devotion and his loyalty to his master. The goddess would have changed his white coat into a beautiful golden dress, and his yellow eyes into blue eyes; the tips of his paws were kept white to symbolize his purity. Beyond the myth, the historical origins of the Birman are little known. The breed was developed in France following the importation of two cats in 1919, offered to Auguste Pavie by Birman priests to thank him for his help. The breed, perpetuated by breeding, was recognized in France in 1925.

Description and characteristics of the Birman Sacred Cat

The Birman is a cat with a really striking elegance and beauty; halfway between the Siamese, whose color it has, and the Persian with its semi-long coat, it has a light coat and a morphology all in roundness: it has neither the crushed face of the Persian, nor the pointed muzzle of the Siamese. The physique of the Sacred Birman is balanced and its eyes are always blue.

A very sweet-tempered cat, the Sacred Birman is the ideal companion for all family members. He is appreciated for his calmness, his delicacy, but also for his playful side which expresses itself quite often and his great tenderness, sometimes bordering on hyper-attachment. Of average size, it has a splendid semi-long and silky dress, as well as superb eyes of an intense blue. The whole associated with the white gloves which decorate its legs and which are part of the physical specificities of the race. Its origins are discussed, but it is admitted that it is in France that the breed of the Sacred of Burma was created, probably from a couple brought from Burma.

Appearance of the Sacred of Burma 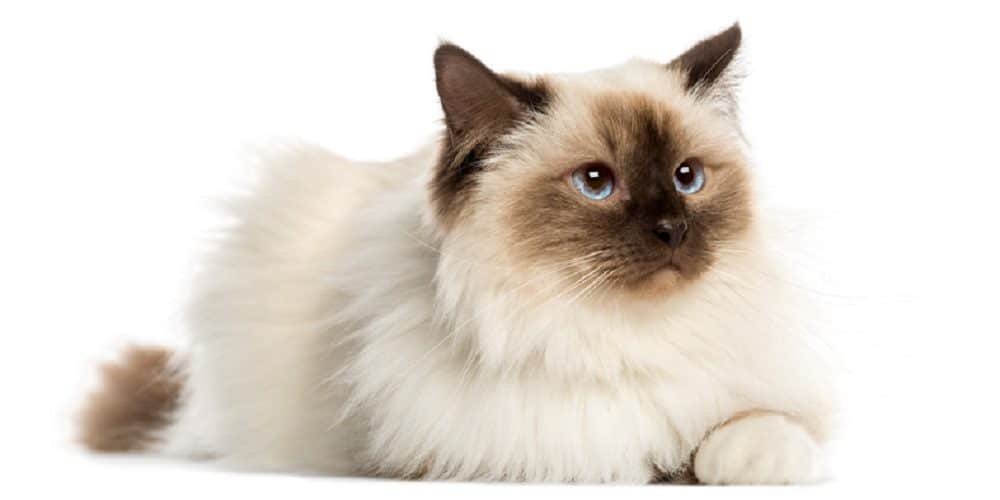 The Birman cat owes its appearance to a cross between the Siamese and the Persian during the 1920s in France. It is therefore not surprising that it is an animal with character and particularly exceptional!

Its semi-long coat is mainly white with darker colors on the extremities, namely the muzzle, legs, tail and ears. These spots of color are called “points”. According to the Sacred Birman breed standard, the basic color of the cat is found in the cooler areas of the body, in the points. On the rest of the body, however, it is white that dominates.

This coloring is one of the particularities of the breed. However, the cats of color point with white legs and a half-long dress are not sacred of Burma for as much! The body of the Birman cat must be slender while being muscular. The legs are short and stocky, the tail is bushy. Its head is powerful and its chin marked. The deep blue round eyes of this special cat will immediately catch your attention. The Birman Sacred Cat’s coat is medium-length, silky, and unlike the Persian cat, the Birman has little undercoat.

According to the breed standards, all point colors are accepted. Black and red are the most common colors, with blue and cream dilutions, as well as chocolate and cinnamon and their lilac and fawn dilutions.

Blue-point: the base color is black, diluted to blue.

Cinnamon-point : the base color is red, visible only in the points.

Fawn-point : the basic color “cinnamon” is diluted in “fawn”.

Lilac-point : is the dilution of brown, it is visible only at the level of the points.

Red-point: the red is the basic color of the Burmese red-point.

In addition, the ends of Birman sacreds can even have stripes! This color style is called “tabby”. Burmese seal-tortie-point, blue-tortie-point or chocolate-tortie-point are some examples. According to the breed standard, the red-based piebald coat, called “tortie”, is also allowed. There are also lilac-tortie-tabby-point Birman!

Today, the origin of the discoloration of the coat of Birman cats is known. It is a mutation that causes a deficient function of the enzyme tyrosinase and thus generates a disorder of the production of melanin, the basis of pigmentation. This phenomenon is called “partial albinism”. The Birman sacred is also able to have completely white legs, called “spores”. This particularity is explained by the mutation of the v-Kit Hardy-Zuckerman 4 feline sarcoma viral oncogene homolog (KIT) gene. Now you know all about the genetic characteristics of the sacred cat of Burma!

Character of the Birman cat 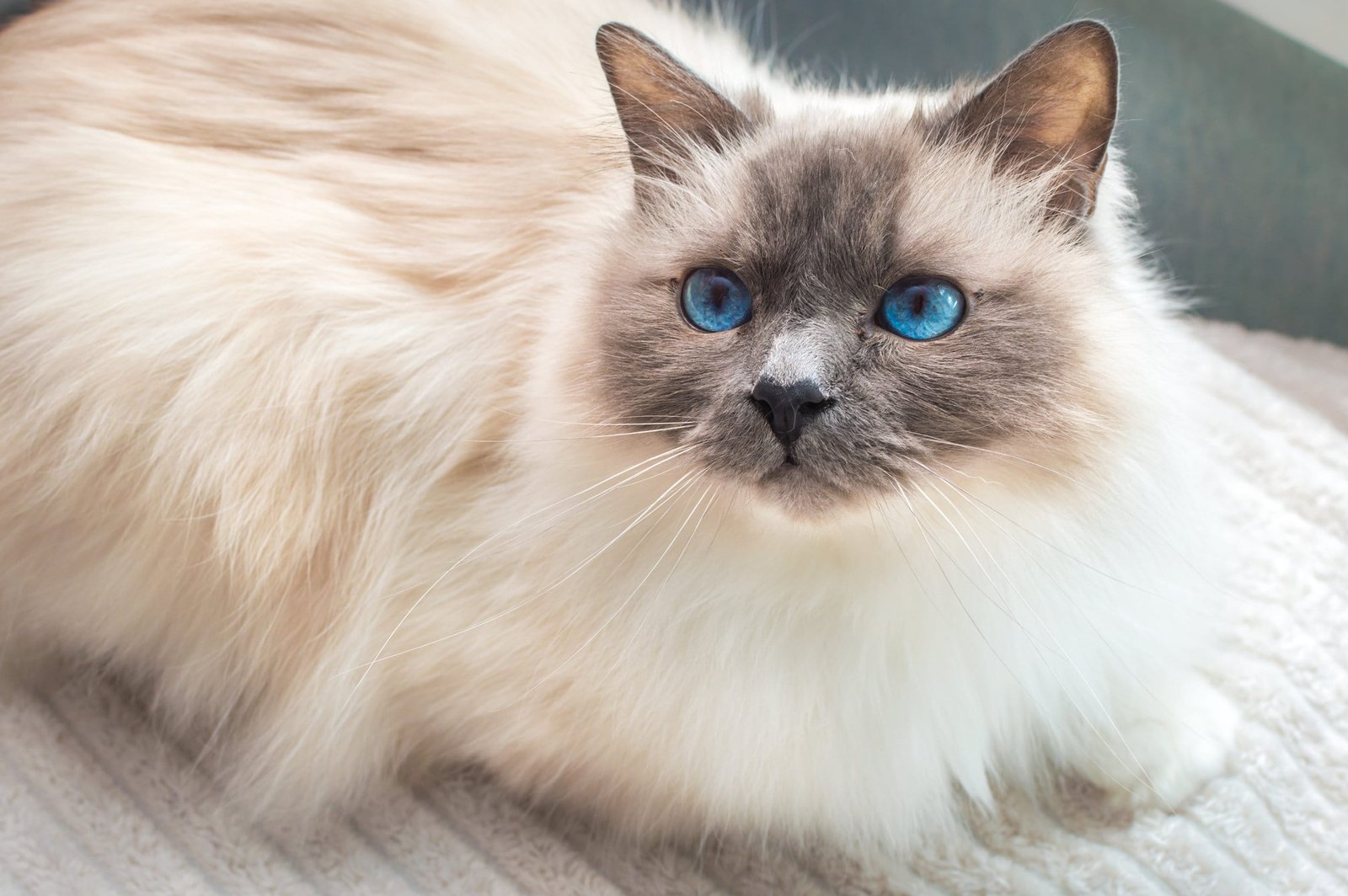 More than a simple cat, the Birman is a “cat-dog”: not very shy, it will enjoy sharing its living space with “its” favorite humans, following them from one room to another, and not hesitating to capture their attention in search of petting and when dinner time comes! The Birman has the advantage of being docile and discreet, unlike the Siamese who meows a lot. With a curious nature, he likes to explore his environment and can sometimes get stuck in a closet or in the basement! It is therefore better to keep an eye on the Birman when he goes for a walk in the house. Very affectionate, he loves to be hugged and cuddled by young and old alike; he appreciates the contact of dogs, especially for play and for friendly naps.

It is not uncommon for cat lovers to fall in love with the sacred cats of Burma, as much for their majestic physique as their adorable character. These cats are a cross between the Persian and the Siamese and are affectionate, docile and enjoy spending time with their owners. The Birman are easily tamed, which is probably why they are considered perfect for families with children. Cats and children make a great team, when all respect the few basic rules. You should prepare your child for the arrival of your new cat by explaining that it is not a stuffed animal, but a living being to be respected and treated properly. Sometimes you have to leave him alone and let him have his space, he will know how to come back to you to ask for cuddles and pampers. He will become your child’s best companion. Although it may seem strange, consider that the same is true for animals of different species. They too need to get used to each other. With a little patience, they will become the best of friends.

The sociability of the Birman Sacred Cat also extends to other animals and especially to its fellow cats. Like all other cats, Burmese cats should ideally live in pairs, especially if you have little time to devote to your little felines.

The Birman cat’s diet should be adapted to its weight, age and level of physical activity. For an indoor cat, kibble is the best base because it allows the cat to crunch and thus keep its teeth healthy. In terms of quantity, it is recommended that you talk to your veterinarian, especially after your Birman cat has been spayed or neutered, as this can lead to weight gain if the cat does not exercise much.

It is therefore important to establish good eating habits, so if the cat asks for a few hours after the meal, you should not give in and wait 24 hours before the next ration. In the meantime, you can keep him busy with treats designed for this purpose, and provide him with catnip for example. Always make sure your cat has access to fresh water throughout the day and ban all human food, which is often harmful.

The health of the Birman cat

The Birman cat has a rather robust constitution, unfortunately, it is subject to a certain number of ailments, especially after the age of seven. After this age, it is recommended to switch to an adapted diet with kibbles for older cats in order to limit overweight and certain digestive or kidney disorders.

The Birman can suffer from kidney dysfunction, most of the time of congenital origin: too high concentration of urea or creatinine in the urine, which can make him suffer and cause incontinence. We will take care all the more to propose him a clean litter and to which he must be able to reach day and night. Burmese kittens can suffer from spasms, the cause of which remains unknown but which generally disappear spontaneously after the age of 12 weeks.

For How Long Do Siamese Cats Live?
Selecting a Cat Breed to Match Your Household
Familiarize Your self With Most In style Cat Breeds
Siamese Cats - Do You Actually Need One?
The Burmese cat
2022-02-12
Previous Post: The Burmese cat
Next Post: How to choose a cat tree? 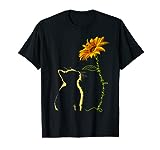 (2448)
$21.99 (as of December 5, 2022 15:25 GMT +00:00 - More infoProduct prices and availability are accurate as of the date/time indicated and are subject to change. Any price and availability information displayed on [relevant Amazon Site(s), as applicable] at the time of purchase will apply to the purchase of this product.)
Cat You Are My Sunshine T-Shirt Cats Tee Shirt Gifts Great T-Shirt Gift Christmas and any other Gift Giving for a Birthday, Occasion. Lightweight, Classic fit, Double-needle sleeve and bottom hem 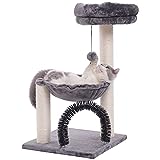 (13313)
$38.99 (as of December 5, 2022 08:40 GMT +00:00 - More infoProduct prices and availability are accurate as of the date/time indicated and are subject to change. Any price and availability information displayed on [relevant Amazon Site(s), as applicable] at the time of purchase will apply to the purchase of this product.)
Overall size:25.98"x16.14" x35.43" Notice: Please try to place it against the wall.Please pay attention:Recently we updated our cat tree,but we still have some old ones in our warehouse,our old style cat trees do not have cushions on the top platform... read more 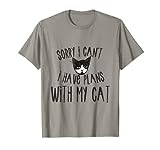 (1575)
$19.99 (as of December 5, 2022 15:25 GMT +00:00 - More infoProduct prices and availability are accurate as of the date/time indicated and are subject to change. Any price and availability information displayed on [relevant Amazon Site(s), as applicable] at the time of purchase will apply to the purchase of this product.)
funny cat person humor tuxedo cat artwork I love my cat Lightweight, Classic fit, Double-needle sleeve and bottom hem

(6)
$9.99 (as of December 5, 2022 08:40 GMT +00:00 - More infoProduct prices and availability are accurate as of the date/time indicated and are subject to change. Any price and availability information displayed on [relevant Amazon Site(s), as applicable] at the time of purchase will apply to the purchase of this product.)